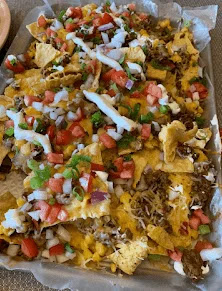 2 to a few green onions sliced

Preheat the oven at 400 stages.

meanwhile at the stovetop, brown the ground red meat and diced onions over medium-excessive warmness until fully cooked (approximately 8 mins) and drain.

go back the pork to the pan, and sprinkle on the taco seasoning.

Stir in three/four cup water, bring it to a simmer, lessen heat and simmer till the liquid on the whole evaporates, approximately 5 minutes.

while the beef is cooking, upload a generous layer of chips to 2 baking sheets covered with parchment paper.

Spoon on chilled beans, half on every pan. those are thick, but I simply upload spoon fulls all around the chips. (The spoon fulls will unfold with the heat of the oven.)

Spoon on half the floor beef to each pan of chips.

do away with from the oven, and sprinkle on diced tomatoes and inexperienced onions.